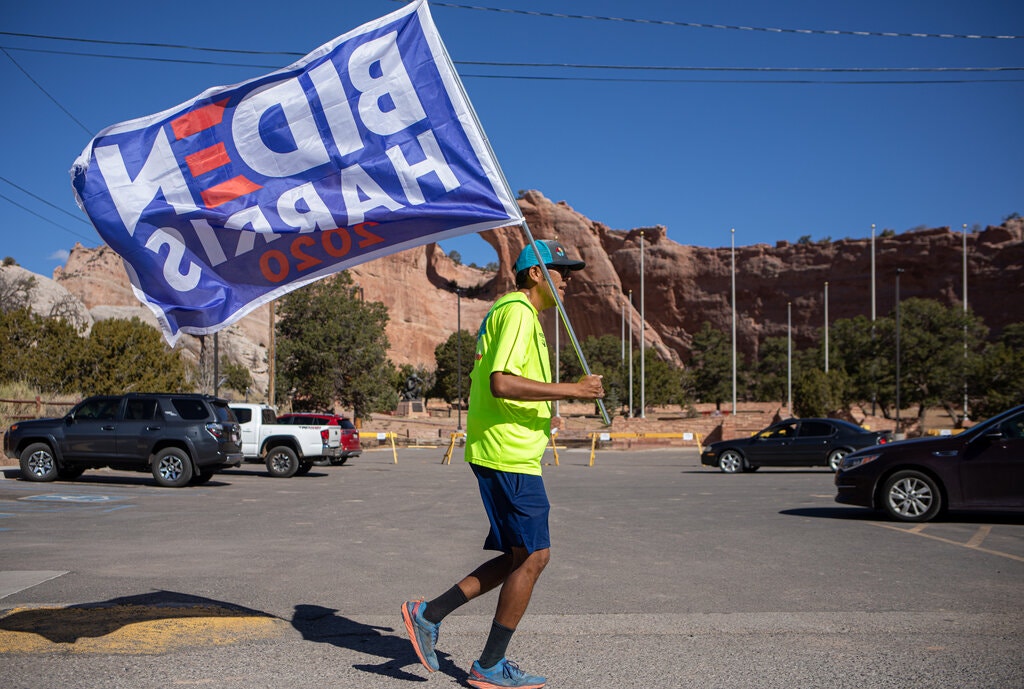 Read the original story in the New York Times.

Very few of Georgia’s more than 100,000 voting-age Native Americans cast ballots in November. Even a small increase could make a difference in the Senate runoffs.

Marian McCormick lives in Georgia, as do 2,700 other members of the Lower Muskogee Creek Tribe. She knows that comes as a surprise to some people.

“Here in Georgia, they tend to think that Native Americans were all removed,” said Ms. McCormick, the principal chief of the tribe, which is based in Whigham.

More than 180 years ago, as part of the Trail of Tears, the United States military drove thousands of Cherokee and Muscogee people off the land they had lived on for centuries and marched them to what is now Oklahoma. Today, the federal government doesn’t recognize Ms. McCormick’s tribe, or any other in the state.

But nearly 150,000 Native Americans still live in Georgia, by the Native voting rights group Four Directions’s estimate. They receive few government services and tend not to participate in nontribal elections, both because they face structural barriers — like hard-to-reach polling places and lack of voter ID — and because of the mistrust built by brutality and broken promises. Of the estimated 100,000 who are of voting age, only about 15,000 are registered to vote.

Organizers and tribal leaders recognize that if even a few thousand more Native Americans were inspired and able to vote in Georgia, they could play a meaningful political role in a closely divided state where two runoff elections on Jan. 5 will decide which party controls the Senate. Buoyed by remarkable Native American turnout in other states last month, advocates are trying to make that happen at breakneck speed.

Ms. McCormick recently spoke with OJ Semans, a co-founder of Four Directions, which is nonpartisan. They agreed to begin a get-out-the-vote campaign with two other state-recognized tribes, the Cherokee of Georgia and the Georgia Tribe of Eastern Cherokee, and to press the Senate candidates — Senators David Perdue and Kelly Loeffler, both Republicans, and their Democratic challengers, Jon Ossoff and the Rev. Raphael Warnock — to address issues important to Native Americans.

Increasing turnout among members of a marginalized community in a month is a tall order, and the deadline to register to vote in the runoffs is even sooner: Dec. 7. The foundations that groups like Four Directions have spent years building in other states — the networks of volunteers and relationships with tribes — are not so well established in Georgia, and Native Americans there are not as heavily concentrated on tribal land.

But the examples other states set this year could provide a road map, even if the reward is farther off than January.

Consider Arizona, which flipped blue in a presidential election for the first time in 24 years.

Based on a New York Times analysis of precinct data, President-elect Joseph R. Biden Jr. received more than 80 percent of the roughly 55,000 votes cast in the Arizona portion of the Navajo Nation — the country’s largest tribe — and in the smaller Hopi Reservation, which shares precincts with the Navajo.

That alone could account for Mr. Biden’s 10,500-vote margin of victory over President Trump in Arizona, even before looking at his strong support among other tribes there, like the Tohono O’odham Nation, which has been enraged by the president’s efforts to build his border wall through tribal land.

On average, Native voters lean left and have a history of swinging close elections to Democrats. Native Americans, including members of Sioux and Chippewa tribes and the Mandan, Hidatsa and Arikara Nation, are widely credited with helping to elect Senator Heidi Heitkamp, Democrat of North Dakota, in 2012, and Blackfeet and Crow voters were integral in re-electing Senator Jon Tester, Democrat of Montana, in 2018.

But like any group, Native Americans are politically diverse. In 2010, Native Alaskans helped re-elect Senator Lisa Murkowski as a write-in candidate after she lost the Republican primary. And come January, the six Indigenous members of Congress will be evenly split between the parties.

The strong preference for Mr. Biden among Navajo voters was related in part to the Trump administration’s handling of the coronavirus, which has devastated the Navajo Nation. But the high turnout was a product of organizing, which takes a lot of time and work in Native American communities that are affected by voter ID laws, far-flung polling places and poor infrastructure, and have centuries of reasons not to trust the United States government.

“No one has ever taken the time to really reach out to the individuals themselves and say, ‘These are the list of reasons why you need to register to vote and cast your ballot, because this is something that affects you,’” said Tara Benally, field director for the Rural Arizona Project and a Navajo citizen. “Building that relationship with the people, it’s what the federal government needs to do. They’ve never actually done that with the Indigenous nations.”

The Rural Arizona Project, a nonprofit that mobilizes voters in rural areas, had seven to 10 field organizers this year and worked with 200 Indigenous artists and influencers to promote a voter registration tool designed for communities without traditional street addresses. Native Americans are often disenfranchised when clerks mistakenly register them in the wrong precinct, but the tool lets voters enter plus codes — essentially shortened coordinates — to identify their locations more precisely.

A separate effort by Four Directions — led by Mr. Semans’s daughter, Donna Semans, a member of the Rosebud Sioux Tribe — registered about 2,000 Navajo voters. VoteAmerica, a nonpartisan group focused on low-propensity voters, sent more than 400,000 texts, according to its chief of staff, Jordan James Harvill, a Cherokee and Choctaw citizen. Advocacy groups also reached out to postal workers, who agreed to drive mail-in ballots straight to their destination to avoid the circuitous route that mail from the Navajo Nation often takes.

Native Americans were also influential in Wisconsin, where Mr. Biden won by about 20,000 votes. The state’s most Democratic area, where Mr. Biden received 82 percent of the vote, was Menominee County, which is near Green Bay and is home to the Menominee Tribe. Ashland and Bayfield Counties, which have significant Native American populations, were blue spots in a sea of red in northern Wisconsin.

Native turnout was substantial, and heavily Democratic, even in states where the race wasn’t close, like North and South Dakota (which Mr. Trump won) and Minnesota (which Mr. Biden won). Four Directions registered more than 8,000 voters in Minnesota.

In North Carolina, it was Mr. Trump who benefited: He improved on his 2016 margin in Robeson County, where members of the Lumbee Tribe are concentrated. Many Lumbee voters chose Barack Obama when he narrowly won the state in 2008.

Mr. Trump and Mr. Biden both support federal recognition of the tribe, but Mr. Trump held a rally in Robeson County where he emphasized it. That, along with his opposition to the North American Free Trade Agreement, probably contributed to his success in the county, said Malinda Maynor Lowery, a professor of history at the University of North Carolina at Chapel Hill who is Lumbee.

Native Americans’ electoral gains this year built on ones made in 2018, when voters elected the first two Native American women to Congress: Representatives Sharice Davids of Kansas, a member of the Ho-Chunk Nation, and Deb Haaland of New Mexico, a member of the Laguna Pueblo people. Ms. Haaland is a contender to be interior secretary, which could further energize voters.

“Those individuals are making a connection between us as members of our sovereign, Indigenous nations and us as citizens of the United States,” Professor Lowery said. “That’s kind of a tortured relationship, but to see people who are willing to manage it and who have persuaded a wide swath of voters to support them is deeply encouraging.”

Part of the progress stems from years of work to decrease legal and geographical barriers. Groups like the Native American Rights Fund and Four Directions have challenged numerous laws that disenfranchise Native Americans, like a voter ID law in North Dakota that required traditional street addresses until the state agreed to ensure voting access for tribes.

The barriers still exist, but the advances have been strong enough to prompt groups to expand their focus to places like Georgia, where Native American populations are smaller and less recognized.

“I think that the fact that so many Native voters did turn out despite all of the obstacles is a really important moment of reckoning,” said Katrina Phillips, an assistant professor of history at Macalester College and a member of the Red Cliff Band of Lake Superior Chippewa. “It’s getting to the point where the government can’t necessarily forget about us anymore.”

Ms. McCormick, the chief of the Lower Muskogee Creek Tribe in Georgia, said she hoped that politicians would take note if Native Americans voted in the runoffs in larger numbers, and that they would develop policies to help Native communities in return.

That could mean reversing a Department of Housing and Urban Development rule that effectively restricts HUD funding to Georgia tribes; increasing education funding and access to health care; and recognizing tribes like Georgia’s federally.

Four Directions is already knocking on doors in Atlanta, where some of Georgia’s Native Americans live, and tribal leaders will help identify members who live outside the tribes’ main communities.

Next week, the group will send a policy questionnaire to all four Senate candidates, in hopes that the responses will help voters make their decisions and hammer home how federal policy can affect their lives.

“We’re going to bring Native issues to the incumbents and to the candidates,” Mr. Semans said. “Whether they want to hear it or not.” 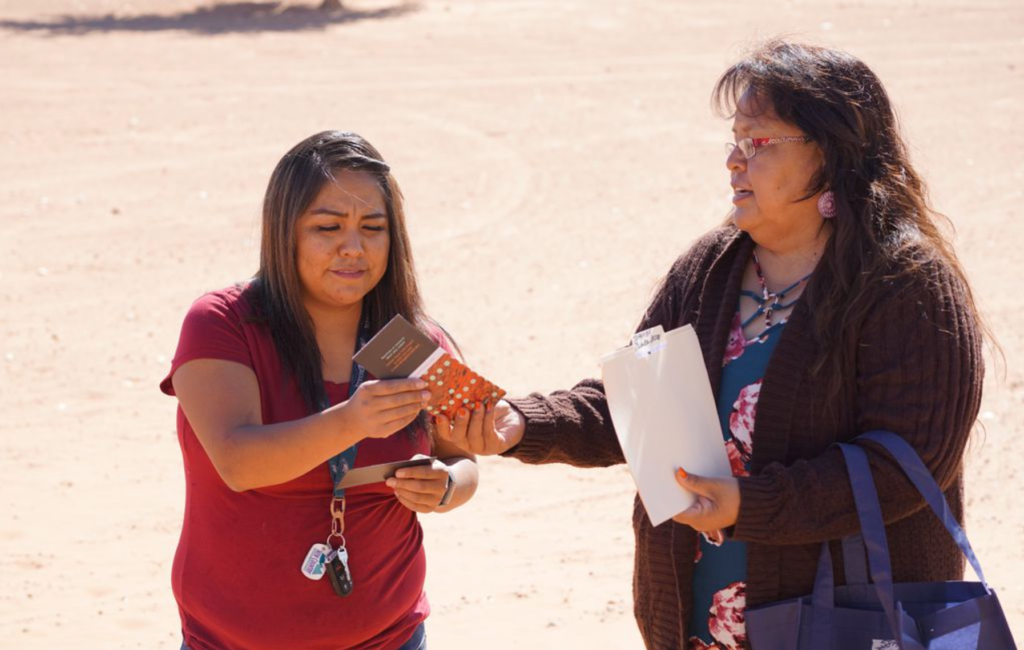 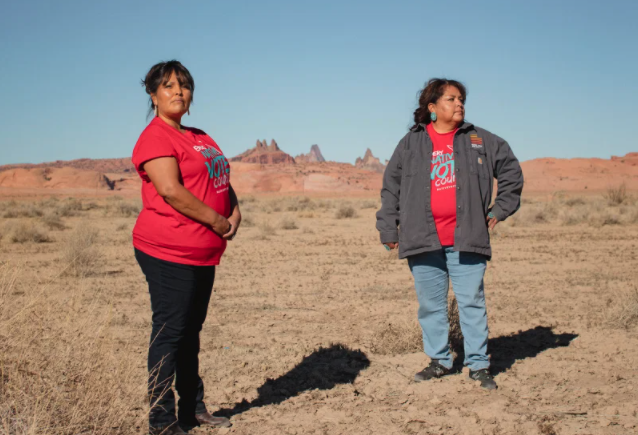